Last Sunday NZTrio, Horomona Horo, Tim Worrall and I gathered at York Street studios to workshop some of the ideas for Toi Huarewa so far. Also joining us was Jonathan King, who documented the process for us on film. 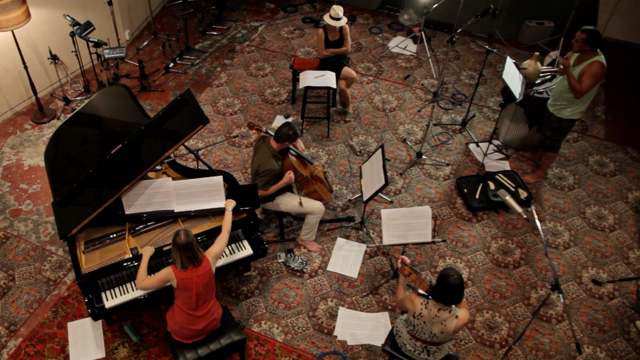 Having the opportunity to work together with everyone in this way was invaluable and, I think, crucial to the development of the piece. The feedback and objectivity that all these wise and wonderful people were prepared to offer created many new directions – and the change in perspective allowed me to hear things quite differently.

The voices of the Taonga Puoro are, in many cases, gentle and delicate. They come from a time and place where there was no means or need to amplify sound. So to hear them in the context of romantic instruments such as the Piano, Violin and Cello – which have evolved over time to project across large halls and alongside symphony orchestras – can be like trying to hear a whisper in a crowd.

According to Maori mythology, the main character in this piece (Hine Raukatauri / a case-moth, represented by Puiaki) has an almost inaudible voice – so the myth I’ve written to be the form for this music involves a struggle to be heard and therefore the ensemble sometimes has to tread on the threshold of silence.

This simple differences between the instruments – such as their relative volume – have had a fundamental impact on the music of this piece. It’s not a matter of asking the Trio to play  softly, or the Taonga Puoro to play louder – its more about finding a musical world where a natural balance can exist between them. This was one of the aspects of our rehearsal that was illuminating – looking for that balance, experimenting with the instruments and getting a feeling for how they – and the players – could best resonate together.

As much as I might try to imagine the sound and feeling of these instruments when I’m writing – and I mean all of them, not just the Taonga Puoro – there’s something very different about hearing them in the open air. Among other things, there’s the chemistry that’s created by the personalities of the players and what they each bring to the music. An intricate web is being woven when these forces come together.

In our workshop situation, Horo was able to suggest things and experiment with his  instruments in the context of the Trio, creating sounds and combinations that then influenced the direction of the composition. The Trio did the same, as they explored the possibilities of their own instruments, finding common ground with the Taonga Puoro. Tim offered a totally different perspective on the music, sometimes challenging aspects of the writing and the concepts behind it from quite obtuse angles. His perspective, throughout the the time we’ve been working on this piece, has caused me to totally rethink things more than once. It’s an inspiring way to work and, I think, quite different from the lonely world that composers often inhabit.

Working collaboratively and having a sense of collective responsibility for a work of art is not a strange concept in Te Ao Maori – which is infused with a deep sense of family and interconnectedness – but for a composer raised in the Western tradition of being isolated and autonomous and having sole ownership of your work… opening the process up to include others is a departure. I’m grateful for the experience I’ve had working in film, because it’s an intrinsically collaborative artform – and my enjoyment of that aspect of it is partly what has set me off along this path. The idea of disappearing off on my own to write music doesn’t seem quite so fulfilling anymore.

When I was approached to write this piece, I realised that I wanted to find a way to incorporate that wonderful (if not sometimes a little uncomfortable) aspect of letting go and relinquishing control – and that this was the perfect opportunity to do it. All creative works have a whakapapa – all composers are influenced by many people and things. I wanted to explore my musical whakapapa and go beyond my boundaries as an individual, to engage with my music’s immediate and extended family.

According to the tikanga of the Taonga Puoro, Horo doesn’t just speak for himself when he performs, he speaks for his ancestors and for the ancestors of his instruments. You could also say that the Trio speaks for their ancestors when they play because many generations of composers, performers and instrument-makers have been the architects of their music. They have a more abstract and less conscious dialogue with their instruments than Horo does with his – but what he does is not foreign to them at all. When Justine picks up her violin to join Horo, there is an echo of Bach, of Franck, of Sibelius or Berg in the sound she makes… even if it’s just in her muscular memory, or pressed into the fingerboard of her instrument. 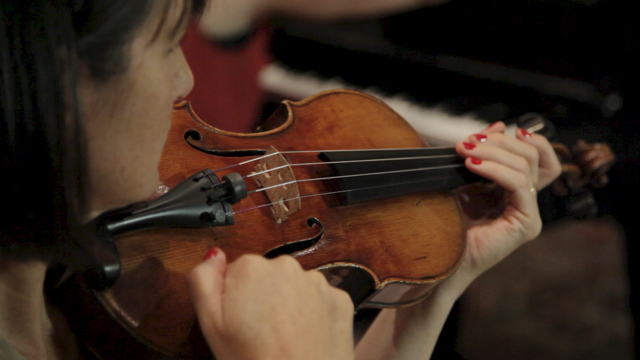 Sarah’s relationship with her instrument is slightly different, because she has to play a different piano in every venue she performs in. Imagine how many pianists she is connected to, by way of her contact with each instrument she performs on – and by way of the energies within each set of strings and the grain of the soundboard, that are released and made resonant by each set of hands.

The piano as an entity is linked to a vast and luminous tradition too, with an ancestry that includes Rachmaninov, Schumann, Beethoven and Bach. But the piano, as we know it, wouldn’t exist if its most ancient performer – with a single-stringed ancestral instrument made from sticks and hair and gut – hadn’t thought to hit it instead of bowing or plucking it.

There are no bowed string instruments in the Taonga Puoro, but the Ku – a single string that is hit with a stick – could easily be an ancestor of the piano. I like to imagine that, just by putting those two instruments in the same room together, Horo and the Trio are transcending some time and space and showing us exactly how different we are not.

All photographs by Jonathan King.

This project has been made possible with the generous assistance of: